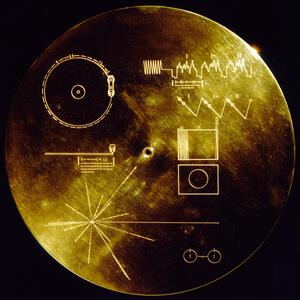 Back in 1977, NASA launched 2 unmanned spacecraft to explore the outer solar system and interstellar space. Remarkably, as of this writing, both Voyager 1 and Voyager 2 are still in operation and are sending data back to scientists on Earth.

I guess some things made in 1977 are still meaningful to us.

Affixed to each Voyager is The Golden Record, which is a series of recordings and images representing the experience of life on earth. Dr. Carl Sagan of Cornell University served as chair to lead a team to select the contents of it. Included is music from all over the world, natural sounds, manmade sounds, and voiced greetings from 55 languages.

Notably, this song hadn’t been created yet. Otherwise, Dr. Sagan et al. would’ve had a tough decision to make. Or, could it have inspired total annihilation of our planet by extraterrestrial forces?

What The Golden Record did inspire, however, is the book See You in the Cosmos, by Jack Cheng, which is paired in The Nature Booklist with Murmurs of Earth, by Dr. Carl Sagan himself. See You in the Cosmos is about a boy named Alex capturing his experience of life on Earth to send to life forms in space, just like his hero, Dr. Sagan. Through the course of the book, the reader joins Alex on his ups and downs as he tells his story through a series of podcasts. This unique format may be attractive to reluctant readers, while some mature themes make this story a good fit for early high school or late middle school.

As always, The Nature Booklist gives you a suggested active learning strategy for each of our pairings. The active learning strategy designed for this pairing is a fun combination of using technology, spending time in nature, and critical thinking. After exploring some of the resources pertaining to The Golden Record on the NASA website, students will work in groups to capture their own audio and video recordings to create their own Golden Records, and then share them with the class. Insightful discussions will be sparked by the choices different groups make for their collections.

Extensions abound for this concept, as students explore how to portray the true nature of the human experience of life on earth in a finite product.

Will The Golden Record ever be found by intelligent life? Time will tell. A nifty uranium “clock” included by Dr. Sagan and his team will help extraterrestrials know how long it has been since the spacecraft launched. But don’t hold your breath--the lifespan of the uranium decay on The Golden Record is more four and one-half billion years.

So it’s probably safe to say to not expect this any time soon.

As always, let us know below what you think about this pairing and the suggested activity.  Perhaps, you also have other ideas to add. Feel free to share them! See you next time.

Dr. Arnone is a proponent of libraries helping to serve their communities with programming about their local environments. She has taught "Environmental Programming with Libraries" and "Literacy, Inquiry and Nature for Libraries" at Syracuse University's School of Information Studies. She is a certified environmental educator in the state of North Carolina.